The amount of money stolen from seniors is absolutely stunning, but what makes this worse is that victims are often too fearful and embarrassed to ask adult children for help, reports Barron’s in the article “Financial Scams Targeting the Elderly Are Rising. Advisors Offer Precautions.” 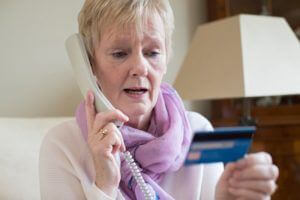 They are afraid their children will take their victimization as a sign that they are no longer able to care for themselves and they’ll lose their independence. However, there are ways to help parents protect themselves with empathy and kindness.

Grown children need to gently discuss the topic of their parents’ vulnerability. The conversation needs to be non-patronizing. Studies have shown that people become less skeptical and more impulsive as they age. The scammers know this, and prey on the elderly for this reason. They also know where the money is: seniors lose an estimated $36.5 billion to scammers every year.

The scammers are also aware that the lines of communication between elderly parents and their children can get in their way. If a parent and child are in regular communication, the threat that the grandson has been arrested and needs bail money won’t work. The grandparents need only send a text to learn that their grandson is alive and well on their college campus.

One of scammer’s victims fell for the story after the predatory scammer told them not to notify their grandson’s parents, so they would not be involved in a family scandal. The seniors sent two large payments, before realizing they were being duped. When they notified their son and the entire story came out, they agreed to accept his help in avoiding being scammed again.

Keeping the conversation as light as possible will make it easier for everyone. A simple “Hey mom, did you hear about this scam?” is going to be a lot easier to take than a “Can you believe anyone was that stupid to fall for this?” approach. Add the question “What would you do if you got a call like that?” Once a conversation has started, it will be easier to transition into other concerns.

Remember that the senior generation was raised with different social rules. They were taught to be polite and may hesitate to cut off a fast talker. A script written on a pad kept by the phone may be helpful: “I don’t do business over the phone until I speak with my son. Goodbye.”

People who are now in their 70s and 80s grew up in a world without smartphones or computers. They may find basic technology a little confusing, even if they are fans of how easy it is to stay in touch with grandchildren. Seniors do recognize that they need help and are likely to defer to children or grandchildren in accepting help with technology issues.

One more generational issue to address: carrying a Social Security card in a wallet. These numbers are a gold mine for scammers, which is why the numbers no longer appear on Medicare cards. Ask where this card is kept, and make sure it’s in a secure place.

The best time to have these conversations is early before a scam occurs and while aging parents are still sharp enough to fully understand the issues being addressed. We invite you to talk to one of our attorneys about the issues that concern you. Submit our online form to request a free consultation.